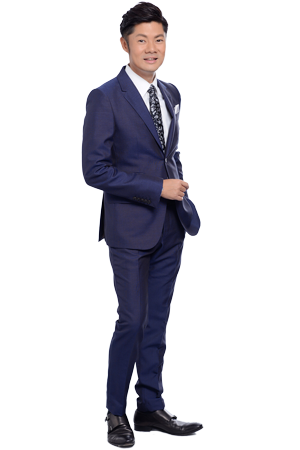 A well-recognised media personality in Singapore, Danny has years of rich experience in various fields.

Danny came on stage in the media industry as the youngest male host on radio and television in 1991. He was among the top achieving personalities at MediaCorp’s YES933 and anchored its morning drive-time show for five consecutive years while hosting Channel 8’s TV variety shows Entertainment News and i-Entertainment. He was nominated as one of the Star Awards Top 20 Male Artistes and won Most Creative Deejay at the Golden Mike Awards in 2000. Danny was a key pioneer for Singapore Press Holdings’ broadcast venture UFM1003 in 2001, where he was Creative and Music Director. Over the next three years at UFM1003, he introduced quality innovations such as a late-night counseling segment, an hour-long in-depth interview programme, an on-air reading club and the world’s first radio forum theatre. Danny returned to television with Channel U’s highest-rated tentpole programme Face Off! 这样是怎样 in 2015. The first season ran for 34 episodes touching on social issues and hot-topics-of-the-day.

In 2004, Danny broadened into education and lectured subjects such as radio production, speech communication and presentation skills. His unique interactive teaching style combines media skills, theatre techniques and theories of psychology. He has taught at various educational institutions including Singapore Management University, Singapore Media Academy and School of Management-Murdoch University’s degree programmes and was twice honoured with Ngee Ann Polytechnic’s Academic Award for Excellence in Teaching. Danny is frequently invited to be keynote speaker, facilitator and trainer for various public and private organisations.

Besides being a highly sought-after event emcee and voice talent, Danny has been intimately involved in the world of drama. He has been a stage actor in over 20 theatre productions by Drama Box since 1994 and served on its Board of Directors since 2005. In 2010, he received a Straits Times Life! Theatre Awards’ Best Director nomination for Bondage, his directorial debut. Danny won a National Arts Council grant to attend the prestigious La MaMa’s International Symposium for Directors in Italy in 2012.

Being effectively bilingual, Danny also writes in both English and Chinese. He was a music critic for The Straits Times and a movie critic for U-Weekly. Danny has been a magazine and newspaper columnist for years, as well as a published author of five titles, including Chang Suo Yu Yan (2004), My Voice – 77 voices straight from the soul (2004), My Voice – Breaking Free (2006), Wei Yan Song Ting (2007), and My Creative Room (2009 & 2011). He was a contributing author for the section on local Chinese music figures in Editions Didier Millet’s The Encyclopedia of Singapore, produced by National Heritage Board in 2006. He was screenwriter and Mandarin dialogue writer for several local films, including Kidnapper (2009), Love Cuts (2010), WatercrAss (2012), Ghost Child (2013), and Meeting the Giant (2014). Danny has also written several theatre scripts and adapted English children’s musicals into Mandarin productions.

Danny was the Executive Producer and Organizer of Hands United Project, a fundraising CD album for tsunami survivors in 2005. It gathered Kit Chan, Joi Chua, Sun Ho and many other artistes who supported Habitat for Humanity’s efforts in building homes for the needy. He has also served on various governmental advisory committees:

He currently sits on: